Relics of the Little Shepherds and Our Lady of Fatima Pilgrim Statue Coming to St. Anthony in Follansbee 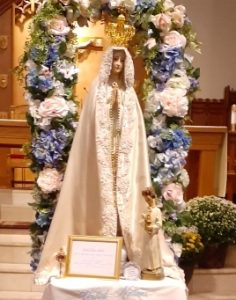 Our Lady of Fatima statue with the petite reliquary of the relics of Saints Jacinta and Francisco Marto, and small statue of the Angel of Peace that travel with the statue.

The faithful around the Diocese of Wheeling-Charleston are invited to pray before the relics of the little shepherds of Fatima Portugal – Saints Jacinta and Francisco Marto, and the pilgrim statue of Our Lady of Fatima, Dec. 8-11, at St. Anthony Parish, 1017 Jefferson Street, Follansbee.

This is only the second time since the pandemic that the relics in the petite reliquary and statue of Our Lady have traveled in the US. The custodian of the statue, Judy Studer, and pilgrimage coordinator, Joan Alix, will be on hand to address the faithful who come to venerate the relics and statue.

The relic visit was secured by Attilio Boni a music minister at the parish, who contacted Alix after learning about this Mother of Mercy mission. Boni, Studer, and Alix believe prayerful reflection before these holy images not only bring hope and healing, but are also needed in this time of violence in our country, absence in our pews, and tolerance of evil in society.

Prayer intentions will be taken to Portugal

All who visit are encouraged to write a special intention on a prayer card that will be taken to the Chapel Shrine in Fatima, Portugal, the week of Dec. 12-18, and be permanently placed in a prayer offertory. The religious in Fatima pray daily for the intercessions and those who made them, Alix said. Rosaries Made in Fatima, Portugal will be available. 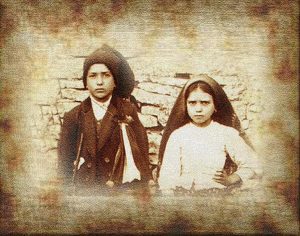 Saints Francisco and Jacinta Marto are two of the three Portuguese children to whom the Angel of Peace appeared three times in 1916, and Mary, Our Lady of Fatima, appeared six times in 1917.

Saints Francisco and Jacinta Marto along with their cousin Lucia dos Santos were eight, six, and nine-years-old respectively at the time. It was during World War I, when anti-Christian forces and politicians were determined to abolish even the thought of God, which agonized Catholics and Christians in Portugal and eastern Europe. For the Marto family prayer became increasingly important. Praying the rosary for peace became a beautiful ritual especially for the children.

All of these heavenly appearances occurred when the children were out on their families’ land shepherding their sheep. The children loved this chore, which took them outside to play and explore.

According to memoirs written by Lucia, the first visit from the Angel of Peace was in the Spring of 1916. The angel said, “Do not be afraid. I am the angel of peace. Pray with me.”

The children knelt with the angel and repeated the prayer he said: “My God, I believe, I adore, I hope, and I love You. I ask pardon for those who do not believe, do not adore, do not hope, and do not love You.”

They all repeated the prayer three times. The angel said to pray that way and “the hearts of Jesus and Mary are ready to listen to you.”

The angel appeared again to them in the Summer and Fall, Lucia wrote that it was to teach them the importance of continuous prayer, begging for mercy for sinners, sacrificing for God, and adoration of the Blessed Sacrament.

The children remained reverent in prayer and faithful to Jesus in the Blessed Sacrament after that. They were unaware that in just eight months they would be the ones who were chosen to be the instruments of heaven and the messengers for Our Blessed Mother, when the infamous apparitions in Fatima began (May 13, 1917).

Splinter of the Holy Oak

A piece of the holy holm oak tree that Our Lady of Fatima appeared to be floating above is included with the relics of the little saints.

Significance of the Statue

This particular statue is referred to as the United Nations statue, because it is the one that more than 800 people from around the world prayed in front of while it was at the UN on May 12, 2017, the day before the 100th anniversary of the Fatima apparitions, Alix said. That was the second time this statue was at the UN. The first time was in 1952, when it was in the Chapel of the United Nations where people prayed for the end of the Korean War. It is a statue of peace.

Alix and Studer will also bring a statue of the Angel of Peace the little shepherds saw. It was created as Lucia described him in her diary.